The bubbles of my life 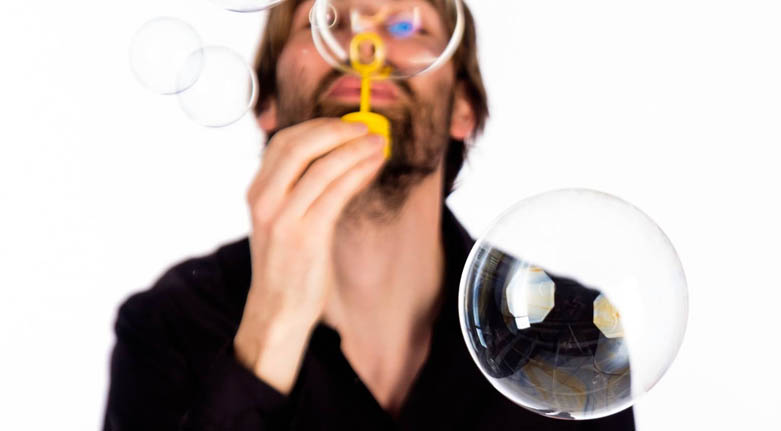 I’m often asked, if I could remember the time before the reunification. I can’t really because I was too young. But there are some fragments like the janitor, who swirled me around in the air and I lost my chewing gum, and maybe someone found it later in the rug. I was frustrated because I couldn’t find and remove it myself. Later I understood, that janitors were the spies of the Socialist Unity Party regime, so I lost my feeling of guilt in that case. I also remember some furniture, which I kept on seeing over and over again, because there wasn’t a huge possibility of selection. And one thing I remember very clearly: There were toys in the TV commercials, which I couldn’t get, till that one day, when my parents came home with three big packages of LEGO. I never asked them, but I’m pretty sure that it had to be shortly after the reunification, and they finally get me, what I dreamed of in the years before. The small bubble of the undemocratic state bursts, because the people there longed for something, which they weren’t allowed. How lucky we were, that it happened so peacefully.

So I grew up in a new bubble, which burst when I was older and moved out: I never came in touch with violence or abuse. It was my girlfriend in the age of 19 or 20, who told me about the way her mother treated her, but I couldn’t really relate. I lived two years in two different cities and became lonely. I needed to step out of the line. I lost my self-assurance, which helped me in school times to walk through the city completely dressed in white, while the mass walked around in black. I got in touch with a dark side inside of me which doesn’t like to be happy. That type of self-suffering led me to a new way of getting in touch with other people and listen to them. I remember a conversation at the age of 25 with a friend. She started to talk about the old neighbour who mostly took care of her, and she didn’t understand everything that happened. In her first relationship, when her boyfriend did things with her, which she had done as a kid with that neighbour, she realized his intentions back then. I listened in despair. So many of those talks followed with other friends. The bubble burst, in which I thought that such a thing never really happens.

My peaceful life in my youth held a lot of thing away from me. So when I joined a friend on a trip some years ago in his VW Bus I enjoyed the ride. Every day we drove on that curvy road on the coast and I saw those great ancient buildings. What a beautiful land it was. One day we left that coastal road and we came across a decayed house, which had the white letters UN painted on the wall. It was for sale. The next village showed me houses with bullet holes in them. Even if that war was about 15 years ago, the scars of Croatia were still visible. From there to our homes it would have been about 12 hours to drive by the highways. Just half a day away and that close to death and violence in my youth. Today there is no destination in the world which would take longer to reach via plane. War which seemed so far away and so unreal became aware to me the first time, because it was right in front of my door, while I was in school or chatted on the internet.

Those are three bubbles bursts in my life, and those aren’t the only ones. There will be more, I’m sure, but I’m not afraid of that. They will enrich my life even in their own horrible ways.