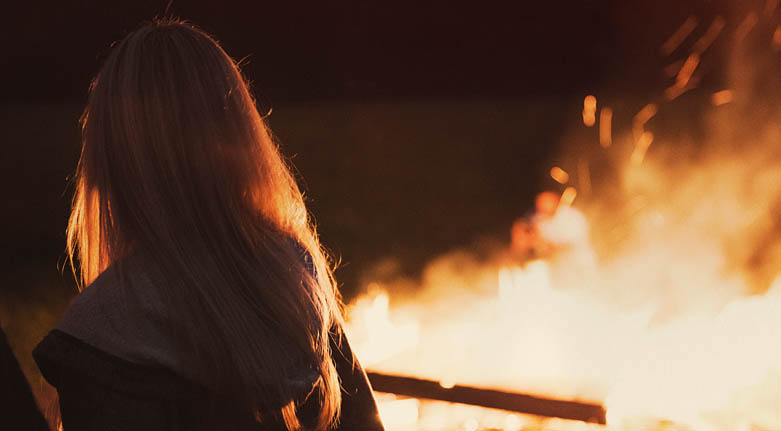 She lunged forward as she stumbled over a branch that was lying on the track. Her hood slid over her eyes and as she lifted her arm to adjust it she realized again the weight of her backpack which made the straps cut her shoulder. Walking next to her was Mia, her six year old sister. To protect herself from the persistent drizzle Mia had laced her hood so tightly that she could barely see. About ten meters in front of her in the fog, she could see her parents and her older brother Paul. They were walking in silence next to each other, her parents hunched under the heavy backpacks they were carrying themselves.

They had been on the road for ten day, or maybe it had been twelve? Anika tried to remember. Most of the nights, they had slept in barns of farms that the mostly friendly farmers had offered to them. They ate dry biscuits, fruit, or the soup that the farmers’ wives would offer them when they were sitting in the damp hay. One time they hadn’t been able to find shelter for the night and they had slept in a forest under firs. Luckily their father had thought to take the good sleeping bags, otherwise they had surely been even colder that night. The sleeping bags were from a time in which they often spent their holidays and their weekends camping. Those holidays now almost felt like they were from another life, as so many things had happened in the meantime.

“I can’t walk on any more!”, Mia suddenly started whining and interrupted Anika’s thoughts. “I want to sit down!” Her father turned around and walked back to the two girls. “I know, sweetheart”, he said and took Mia’s hand. “Just a little more till we get behind the trees, there we will rest a little. It is not safe to stop here.” He looked around and cast a short worried glance into the grey sky. Mia started crying and her father pulled her slowly with him. Anika walked behind them and caught up with the small group. Now she was walking between her mother and Paul, who was holding a map in his hands, which he was studying while walking. “Where are we?”, she asked him. “We must be close to Bielefeld”, he mumbled without taking his eyes off the map.

Bielefeld. Anika had already seen many cities in Germany but she had never been to Bielefeld. And this time she would probably not see a lot of the city either, her father avoided the big cities, apparently they were too dangerous. He had become very careful in the last months. She used to know him as an adventurer who looked openly and bravely into the world and faced everyone, no matter where they came from, with a smile. Now his laughter lines had given way to deep lines of worry that were showing on his forehead. His otherwise easygoing and upright walk had given way to a hunched scuffing. Anika was monitoring him with worry and fear, because if her father was scared of something, it had to be really dangerous.

Her mother on the other hand was still always positive, and tried to get something good out of every situation. It was sometimes so tiring that Anika didn’t dare to show, in moments like this, that she was sad or scared, because her mother used up so much energy to make the journey bearable for her children. That’s how the watery soup of the farmer from last night was declared a feast, sleeping in the hay became an adventure holiday, and thanks to the rain, they didn’t have to worry that they would start to smell. Anika admired how her mother could get something good out of every unbearable situation. Or at least could act like she did. But somehow it helped, sometimes, at least it gave them courage.

They had almost reached the small cluster of trees and Anika was glad about the prospect of sitting down, maybe even taking her shoes off. As she stepped under the canopy of leaves she saw that another group of people had already sought shelter there. They were eight persons. One man was throwing wood into a small fire, two children were leaning on a tree sleeping, a woman was cutting a loaf of bread into slices. All of them paused what they were doing and looked in their direction when they arrived. It frightened Anika a little, Mia hid behind her father and Paul lowered the map. For a short time everyone was silent and staring at each other. Anika’s father raised his hand to greet them as the man on the fire called to the others: “It’s alright, they are just civilians”, and then said in their direction “Come closer, we still have space next to the fire.” Anika’s mother was the first who moved a step forward and the others followed her.

They put down their backpacks and held their cold hands to the fire. “Welcome”, the man next to the fire said. “Where do you come from and where are you going?” – “Potsdam”, Anika’s father said, “And we are on our way to Ireland.” “Potsdam!”, the man said surprised, “Well, you lasted quite a bit. We are from close to Leipzig, on our way to northern Holland. On the countryside it was still bearable till recently, but at some point we had enough…” Anika glanced to her father who was nodding his head in understanding. “Yes,” he said, “at some point you just have enough indeed.”

Anika heard a branch crack on the ground behind her and she turned around. There was a girl, about her age, with a blonde curly head, almost like Mia’s, and bright blue eyes. “Hi!”, the girl said, “I am Lotta! Are you refugees as well?” Refugees… Anika pronounced the word carefully in her head. She only had known this term from the TV until now. However, this described them, since ten or twelve days. Refugees who had to leave their homes, because it wasn’t safe there anymore, and who now were trying to reach an island named Ireland by foot, where the sister-in-law of an aunt lives, one that Anika didn’t even know. There they were planning to wait until living in Germany would be safe again. Until they could return home. Anika nodded slowly and said quietly the words that would define her from now on. “Yes, we are refugees as well.”