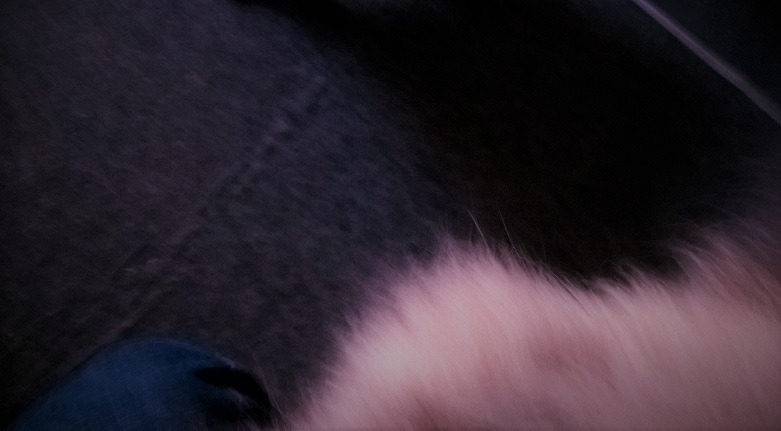 I pass this road almost every day and it is not very comfortable on the bike, because I’m constantly waiting to be overtaken by a car which wants to pass too narrowly and too quickly. On this morning it is different. It is Friday morning and it seems as the traffic had already started its weekend. Not a single person is here and on my way there is only a plastic bag, at least that is how it seems from the distance, even though the low sun makes it hard to see clearly.

My attention is awaken because recently I saw fairly close on a field road a strange grey shape. I was sure that it had to be a radar trap and realized with surprise that someone had left here an old TV and a suitcase, even though the local landfill, where one could have deposited both for free, was one kilometer away. It was strange how an object could change and deceive. To me those mistakes happen more often, because my eyes can’t look synchronously and thus I can’t see three-dimensional. People keep asking me how the world looks to me. I don’t know, I don’t know the difference. For me things don’t look flat, but I have no idea how the world might look for someone who can see with both eyes at the same time.

On my bike, anyway, on this morning the small grey pile looks like there is a plastic bag. I don’t have a lot of time to recognize it, because I am riding quickly. So quickly that the cars wouldn’t have to overtake me, if they stuck to the speed limit. The tire is thinner than my thumb and inflated so much that it almost doesn’t touch the ground. I couldn’t drive better but it is harder to brake sharply. Here I don’t need to brake and I see driving by that the grey bag isn’t made from plastic but from long grey hair. It’s fur and the middle of the fur is blood red. I get sick and the until now nice day becomes darker. I try to move my focus away from the dead body and only my speed helps me to do so. It could be a cat, or even more likely, a cute small dog. One of those who always seems to smile. The focus of my eyes I could change, the focus of my thoughts I can’t. It is stuck on the grey something and my stomach feels uneasy. In front of me the crossing appears, after which it goes uphill, behind me I can hear the roar of a truck that probably wants to overtake me before it and then force me stone-cold off the road. I get upset about it but instead of overtaking me, he gets slower and stays behind me. He waits until I have passed the crossing and speeds up on the hill, faster than I could have. I am thankful that he didn’t put me into unnecessary danger. And what I notice only later, he distracts me from the grey fur, until I encounter on the way to work the cats.

The two cats look at me questioning, asking where I suddenly come from, as every morning. They don’t understand that I am here because of work and not because of them. I will pet both of them on this day and I will be happy that they are alright. The dead fur, though, it makes me think about us humans who don’t know death anymore. Who have death in front of us every day in colourful plastic packings. Plastic packings with prints of animals which are full of the joys of life. Still, we don’t make a connection to our beloved pets.

Death is so far away, it seems. Death, however, is so close.