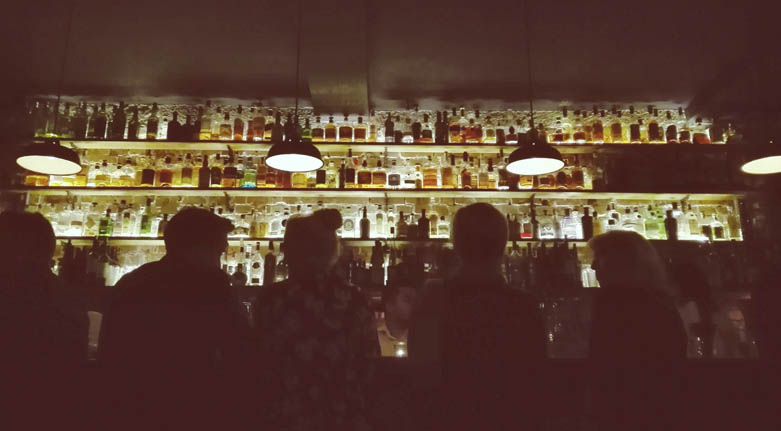 “It’s on me.”
The pretty guy behind the bar winks at her with ice-blue eyes as he puts down the gin tonic in front of her.
She beams at him, glad about the attention and then she soothes down her shirt before she takes a seat on the stool in front of the bar and reaches for her drink. The writing on it is covert behind her long hair and one has to stare a moment too long on her breasts to decipher it. Ask me about my feminist agenda. She had thought it was funny, back then at college. She had enjoyed to dive into discussions with adolescents in some college bars on sexism, women’s’ rights and all the devastating effects of feminism.
The shirt is wide but it barely covers her belly which hasn’t yet formed back after the pregnancy.
When she looks around a little too long and glances into the happy and drunk faces she can almost feel their thoughts.

What kind of mother leaves her newborn at home to do pub tours and get drunk?

And anyway, what about that short skirt and the fishnet stockings? What is to become of this child when the mother walks around like this? How can the father approve of it?

If she is completely honest to herself, it is her own thoughts that whisper those questions. That she had brought the little one to David for the weekend and that this is her first free night in months, doesn’t make a difference. Not even the fact that he often hops into bed with Laura, that 20-year-old blonde from his marketing department.

The barkeeper doesn’t seem to have noticed anything, he keeps pouring drinks and leers at her every now and then. First she feels flattered then the voice sounds again in her head.

Oh, and now she is going to hook up with this broke guy who is not even half as old as her? Doesn’t she have any dignity?

Without thinking about it she whips out her purse and pulls out a note which she holds out to him. He frowns but she doesn’t shirk from his look.
“I insist.”
She is relieved when he reaches for it. How could she let herself go even for one moment? After all, she knows exactly how this goes.

If the guy pays, you take him home. If you don’t take him home, you are an ungrateful brat who has wasted his time and his money. But if you take a guy home too often, you are a slut, so beware who you take a drink from and how many people are watching.

This logic never quite made sense to her, even though all the girls she used to go out with in her college days seemed to stick to this weird codex – her included. When David first talked to her on the tram and later it had become clear that it would be something long-term, she had been endlessly grateful that she had escaped those unwritten dating rules.

And here she was again, ten years of marriage behind her and not one step further on this field, while he was inviting one woman after the other into his bed without having to justify in the least.

The doorbell rings and her friend comes running to her, red cheeks and a sensationalistic spark in her eyes. “Hey honey, you look great!” Her hug pulls her into a cloud of parfume. “You will not believe who I just saw! Vicky, our eternal single neighbor literally walked out of her flat with another guy when I left. I mean, no surprise she never had something serious – what guy would like a woman who puts out every night on another guy?”