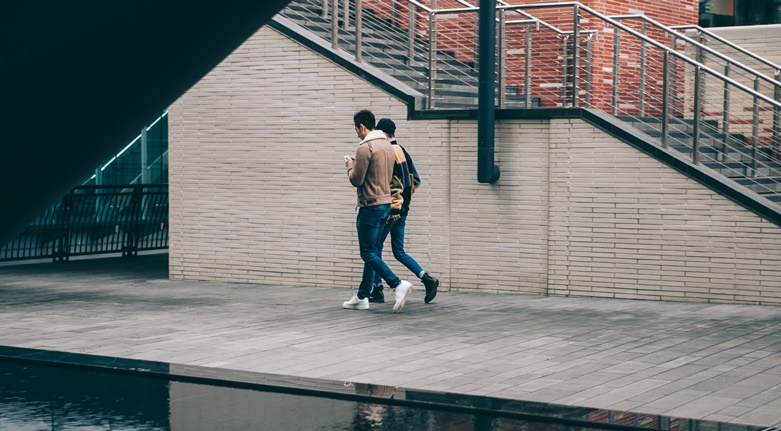 They didn’t only share the same first name, they were best friends and had the same age, even though Mohammad the First was at his 19 already 23 years old and his birthday was naturally on New Year’s Day. Mohammad the Second however, was really 19 years old and probably not born on New Year’s Day. Like kings the marched through the city centre of Frankfurt with their bright red Nike Preso Fly Ultra Mega Limited Collection and seemed more like a clown and Rumpelstiltskin in partner look. Six months they had saved money for the highly coveted sneakers that they had bought from their sparsely measured asylum seeker money, or “Covering of personal necessities in everyday life” in careing officialese.

Mohammad the First was a passionate kickboxing fan and was always looking vainly for affordable courses which were reachable with public transportation. He never considered himself too good to ask at every possible sports club for discount and always thanked everyone politely and calmly even after the unfriendliest of rejection, along the lines of “we are not the sport’s social security office of the world”.

Mohammad the Second documented every second of his life on Facebook. I determined with surprise that the viral posts of these guys looked different than ours. They contained for example soft focus lense selfies and pictures with flowers, impregnated with corny calendar mottos, more than 500 likes and many comments. Furthermore, he worked and scrolled day and night fanatically through recent news and testimonials of political happenings in his homeland and posted often about attacks, that were there sad everyday life.

“We are Hazara, Janem”, he said in English like a decree that stopped the laughter. Before I could ask and as I wanted to disappear from the face of the world out of embarrassment because of my sublime ignorance, he enlightened me. The Hazara are one of the biggest ethnic group in Afghanistan. They speak Hazaragi, a Persian dialect and their appearance seems rather Mongolian, he pointed at his narrow eyes and smirked.

Quite often he was asked by perky fellow passangers on the tram where the next China restaurant might be. Too often Chinese tourists asked him for the directions to the main station. He always answered with the only line he knew in Chinese: “Have a nice life.”
He and the other guys were Shiite muslims and shared the same fate to be discriminated by the Afghan majority, pursued by the radical Islamic terrorist army, in broad daylight massacred and lastly banished. But these short biographical notes were just the motor for their and of course his own story.

From the first day on, instead of Cansev he called me “Janem”, which means in Dari “my love”. In the beginning I found it annoying but I got used to it because from the first day on I liked him and every Sunday afternoon I liked him a bit more and my curiosity rose.
He always dressed in black because he wanted to take advantage of the only good thing that came with living without his family: not to be dressed by his mother like a mummy’s boy. He was held in high esteem by the other guys and the volunteers because of his smart and confident ways to deal with things. His English, which he had learned in school after his first escape to Pakistan, was even better than Mr. McDonald’s

I said goodbye to the guys in an almost laconic way and looked back into their shining eyes, before I took the next tram.

This was my last Sunday afternoon as a so called refugee helper. Head first, motivated by my helper syndrome, I had wanted to escape the dull chaos of my self-discovery, that lastly overtook me. My reality seemed in comparison to theirs’ so much more stable and privileged. Volunteers suddenly became goody-goodies and “advocates of humanity”. How wrong and narcissistic it was to think, that refugees, and asylum seekers, simply humans, diverse and completely different from each other, dependent on us and our help. Even my solidarity, my interest came from exactly that basis, the thought that because of my origin, my language, my culture I was better and mightier than they were.

For a long time I didn’t hear from the guys. Just one time I saw Thorsten with Mr. McDonald’s and Mohammad the Second leaving laughing a halal burger place and then they went their ways in deep solidarity.