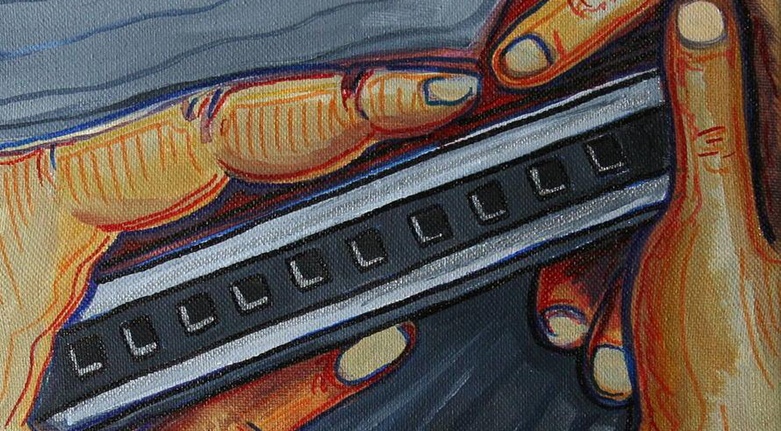 One year ago, I didn’t have a quarter of the wishes I have at this moment, this surprising development wasn’t the result of a sudden increase of my level of ambition, and it certainly wasn’t my birthday so I could blow away my wishes recklessly over the candles stained with the whipped cream. That was just a small part of my new world, harshly hugging my bones, without having the will to hug it back on my side… What a silly life this is, indeed!

I held the small harmonica with my hands, it’s the last thing I have left in this world; the two of us in the middle of this turmoil which holds no mercy towards no one. The two of us in the depths of a continuous, silent night. I have always hated this old harmonica as much as I hated wars that have found their way to my life eventually. I have never been good at playing it; maybe I haven’t reached the proper mechanism of its function with my limited intelligence and my rough boyish skills. I got my mouth closer to one of its peaceful side holes, and I thought hard in my jelly mind about specific tunes, a simple order of wind blows nothing more, but barely thinking about it made me realize the melody I seek was impossible, thus, I whistled a single long blow in one direction toward the angle of no turning back, and then I stopped.

I did not feel a thing. It was pretty normal, I stared at the harmonica once more; it was not an art piece or something, rather a very ordinary object like any harmonica in the classic cartoons. I used to like its dark scarlet color, it had a trait of the elegance of silence, a seniority above the daily silly issues of life or something, adjectives I have never had in my characters that came from a low level of sophistication. It was certainly not a color that told any specific melodies, as if it would have had it been bright red for example. It just flooded uninterrupted like a ray coming down from the moon in a summer night.

I smiled for a minute, it would be mesmerizing had the color of the light of the moon been dark red. I’ve always hated the moon as well, never understanding the reason of its fake romance, as it is closer to horror movies in graveyards full of ghosts and escapers from the hells of the other world. My smile got wider staring at the moon above my head; it was somewhat beautiful. Alright, it was not a full moon, barely half a moon, and it was a strange night holding me together with an old harmonica and half a white moon looking like a piece of salty cheese.

I will not think about the cheese, but a warm small slice of it would truly be great under the moonlight with a calm melody coming out of an old harmonica, but hold on a minute. Certainly, none of this is going to happen; I don’t know how to play the harmonica. Oh, and I also forgot I have no cheese now, okay, I still have the moonlight at least. Unfortunately, it’s not a full moon, just a silly pale half-moon, but does it.

One half moon above the whole world. This will sound silly but it connects me to everyone looking at it right now, exactly like a magic mirror in the old tales, or like the screen of a portable phone in the tales of the upcoming world. Our looks meet and our kisses move around the world in the speed of light. It sounds bad, doesn’t it? I’m a bad dreamer who doesn’t know the first thing about imagination, I’m aware of that, eventually, I don’t play the harmonica.

I held the harmonica again, it was the last thing left from my mother’s, and my mother was the last one left for me from my family. Everyone suddenly left, and it was down to me, her, and the harmonica. She realized I would be a failure musician since the first time she looked at me, thus she didn’t give it to me as a gift like the other mothers. I used to hate her beautiful playing in the yard of our old house, I had to wait for her to finish a long, slow melody every night in summer before I’d ask her for another cheese sandwich. I was a very voracious kid, but I was nice as well; never interrupted her, waited for her till she moved her delicate lips away from her harmonica, enjoying a sacred moment of silence, one that was spiritual, divine, then moving towards me to kiss my messy hair, looking exactly as miserable as it looks right now -my hands feel it reflexively, unwillingly, I don’t believe combing it would attract girls toward me, no sane person on earth can look at me with the slightest admiration, because I still cannot play the harmonica, or maybe because I once was a voracious kid, I really don’t know.

I put the harmonica back to my jacket’s pocket, looked around me at all the rubble, beautiful as ever. Here stood my old house, nothing is left of it, for sure, I can even smell the smell of my old burnt memories coming from all around me. I bet my life, it is the smell of burnt memories rather than that of burnt human meat, I can finally successfully tell the difference between the two; the first was stronger the scent of gunpowder wrapping the second -I’m not an expert in the names of the modern bombs, so I refer to all of it as gunpowder. Inside, I’m still a child who likes simple cartoons, I tightened the grip of my fingers over the old harmonica so that I wouldn’t forget the lips of my mother and the taste of her warm sandwiches, like I have forgotten everything else. I whistled the melody she used to play under the moonlight, and I stared at my half of the moon begging it desperately to look her up for me between all the worlds it sheds light on. Who knows, maybe the moon is just another lie -like everything I have ever lived- instead of being mere rocks lit by the sun from afar. Yes, it might be a magical mirror holding us together without us knowing, something I wish for from deepest in my heart.

I smiled imbecilely while the childish hope grew inside me unexpectedly. I stared at the moon with my weak imagination picturing it with magical bright colors. It did not work out, it is after all nothing more than a huge slice of cheese … No, you’re just hungry, it’s mere dark universal rocks … But it shines with a pale sheen in the depth of the night, don’t you see it? … That’s because it reflects the light of the sun, idiot! … Then it IS a magical mirror … Nope, just a huge mirror, a broken mirror, its edges much untrimmed, I think it’s a curse of some sort … You’re scaring me now … But it’s the truth, unfortunately … I’m not sure, I haven’t thought about it before … You’re right, we shouldn’t think about things like these, they’re ill omens … The voices inside of me faded away, silence ruled all of my worlds. I lied in place despite of the roughness of the ground, and I didn’t notice the last clouds that blocked the moon away from me, forever.