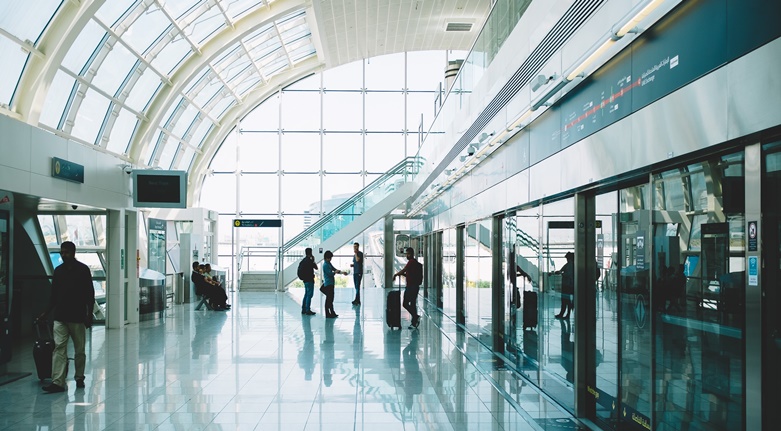 „I will have to ask you to come with me for a moment, we have to do a separate security check.”

There are many people who hate their jobs. But I have realized for myself that hate does not have a remaining nature. It almost seems feathery, it arrives and in the same moment it already fades away. For me hate stepped aside for else. Because if hate wasn’t fleeting I would still be filled with hate, I would always be snorting instead of breathing and my hair would have shed. It was something else. Yes, the right and the left side of my forehead was already shiny in the bright light, but it was because of something else.

„I will have to ask you to come with me for a moment, we have to do a separate security check.”

It’s the shirt, the tie, which is too tight. Tight, tight, far too tight. Actually, I see it more than I feel it, I see it on the screen that is hanging over me. It shows what is happening at this moment. In the first weeks that I was working here I had watched the passengers that had been rushing back and forth, a stream of hurry, the fast steps, the incomprehensible announcements in the big halls and the goodbyes. It’s not hate, I just think it is absurd that I got used to the goodbyes. It was the only feeling inside me, incorporated through my lifeless eyes, it was a strong feeling. I see it every day hundred of times from my spot, the people are saying goodbye.
„I will have to ask you to come with me for a moment, we have to do a separate security check.”
However, this white shirt with this far too tight tie, it’s so repulsively tight, is somehow unique. It swallows everything. The rush, the fear of the people who have to go through security, the loneliness that sticks on after the goodbyes like coffee on the teeth. I’d think that this shirt had already swallowed me if I hadn’t been seeing me on the screen all the time. Repulsively tight.

Meanwhile the goodbyes are not more than the entering of Mr. and Mrs. passenger such-and-such into the plane such-and-such with the flight number such-and-such. One in a million and the only thing that remains is not more than a hint of sadness in the faces of the ones left behind, before they turn into numbers in the statics, how many visitors are here in a week, in six months, in a year.
„I will have to ask you to come with me for a moment, we have to do a separate security check.”

Suddenly something next to me beeps loudly and the light on the detector flashes redly. A young woman looks around, frowning, she looks at my collar. I know what she thinks. My tie is as absurdly red, alarmingly red, as the light that is flashing right now. To be safe I look on the screen over me and I calm down when I see that nothing has changed, as I see the far too tight tie. “You have to put your belt into the box”, a colleague says and I turn away.

I see the shift change at the café opposite me, it means it’s 12:20 am. The young man with the green apron smiles shortly at his colleague and steps away from cash point. In his usual slightly gushing rush he takes his green hat in his hands and disappears in the back. That means that it’s ten minutes till the break.

In my row the eleventh passenger is walking through. A few weeks ago, as they had ordered, we checked only after twenty passengers. When I was on holidays for a three days because of my mother’s funeral, there had been some attacks. I find it hard to believe. If it hadn’t been for this drastic change I wouldn’t do it. Now I have to ask every fifteenth passenger into our safety room for the separate security check. Yesterday I dreamt of the attack.

“Racist.” His voice grows louder. Passenger one to, I think, eleven behind him are looking at us.
If only my collar wasn’t so tight, his glance would have maybe already penetrated me. Maybe that’s why we have to wear the ties so tightly. Only five minutes and I can breathe, and I can leave.

I say please. Does he hear me? The tie, it is too tight. He says something but I cannot understand him. I show him the screen. You see? You see the red tie, my moss, my salt, my friend. The air is getting thinner. You see how tight? “You have to follow me.”

“What’s wrong with it? It’s just clothes, not more. And you have a beard as well! It’s only fabric. It’s only hair. I have a skin, just like you!”

If only he knew how tight my tie is. I look at the screen. Like fire in the forest and trees on the water, I see me.

Can’t you see on the screen that I can’t breathe? Look at the screen.

Do you see me?

What do you see?