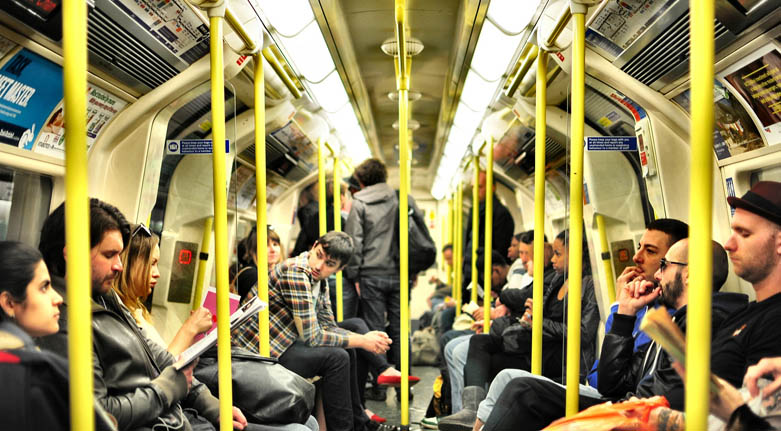 Eating a greasy burger at that time of the day was one of the things that I always thought impossible. Admittedly, I hadn’t known until that moment that I felt this way, I had never thought clearly that it was impossible but when I saw the man with the yellow raincoat and the goatee next to me it seemed like an improbable act. Next to him was an old, partly rusty trolley rack with a few dozen copies of the Stuttgart Weekly Paper and in his hand the burger was gushing with grease.
Just like me he seemed to be waiting for the next tram.
He took a bite and I saw how a slice of his cucumber fell on the platform. The desire in me to screw up my nose and to express my overwhelming and paralyzing disgust was so evolved in this moment that only my eyelids were heavier and they stopped me from it.

It was 5:50 am and it smelled on the central station. It smelled of beer bottles and sweat, stress was in the air, that made one, or me, lethargic and dull, no matter in what mood one was. It annoyed me that I had to wait 15 more minutes. The man with the goatee turned into my direction. I wished he hadn’t smiled. My stomach seemed to revolt against the look of his face and for one short moment I felt sick, almost as if it was my fault, even though I was pretty sure that it must have been the disgust. He hadn’t heard the announcement of a moment ago. How should he have, with so much food in his mouth. With his free hand he pointed to his ears and shrugged, pierced me with an ugly grin and an asking gaze.
I muttered that the tram was delayed. “You can enjoy your meal, don’t worry”, I added without looking at him. I thought that I heard him laugh on that, even though I couldn’t detect a reason for it. Neither had I flattered him, nor made a joke.
Maybe I should wait upstairs, maybe…
My legs were weak and tired from work that even at the thought of climbing the stairs they started to protest.
It was my luck though, that I had sat down on the bench next to the bin. I threw the old bakery bag with the bun that had become hard in the direction of the bin to release myself from the trash in my bag.
Right beside it.

Inside the tram the confining smell kept haunting me. By now my nostrils were quivering, seemingly an ancient current, that didn’t stop flowing, tainted with the aversions and rot of our earth. Even my nose hair felt scorched.
They simply should have stayed at home, those people, in their smelling houses and should have let me ride home in peace and quiet. In the coach I walked a few seats further until I could be sure that the greasy hamburger was not close by.

A few stops later an old woman entered, steeled with a walking aid. Just like me she didn’t seem to be comfortable, just like me she grimaced when she breathed in for the first time.
She broke the silence in the tram. At first I didn’t understand her. Not because she had entered further away from me, much more because she was talking so fast. In her voice you could hear a hurry, as if the words would blow out inside her if she didn’t shed them, gradually louder. Some heads were already turning around.
I was scared to fall asleep. It had happened once before that I had missed my stop because I had been asleep. I perceived the word “terrorist” and I positively felt how the tension squeezed itself next to the with smell and people overcrowded tram. “Go back!”, she shouted. “You terrorist make our lives miserable. Back, you dirty vermin, back to your country!” She screwed up her nose. The woman she was shouting at didn’t understand her. She was sitting and tugging at her sleeve. Only now I saw her and her green headscarf. Almost as loud as the walking aid she answered in a language which, it seemed, neither me nor anyone else in the tram understood. The headscarf was standing up and was about to help the walking aid to her seat.
I could hardly keep my eyes open but I forced them to stay focused. Blurred outlines of wild gesticulation appeared and disappeared. I felt sick. They were talking loudly and got louder and still I could hear less and less. The smell was too much. Even the window next to me, the seat on which I was sitting, were withdrawing that numbing smell.
I needed a shower, I thought, as I closed my eyes and it got quieter, then louder and finally completely silent, never had I needed a shower more.